Skip to primary content
The police campaign to intimidate and even terrorize the anti-mining movement in north-eastern Halkidiki took a new turn this morning when several platoons of riot police entered the village of Ierissos, allegedly to summon witnesses to the regional police HQ in Polygyros and to conduct house searches. Residents initially reported 6 platoons, but later concluded that the number of riot policemen was much, much higher. Officers from national security and anti-terrorism units also participated in the raid.Residents quickly gathered at the entrance of the village. The riot police marched into the village, throwing large quantities of tear gas (video 1, video 2, video 3). Multiple eyewitnesses, including the headmaster, report that tear gas was thrown inside the secondary school, which had to be evacuated. One student was wounded after taking a hot from a tear gas canister. Several people are reported to be suffering from breathing problems and need medical care.

The police spokesman, in an phone interview on SKAI TV, denied that any tear gas had been used and claimed that the breathing problems were due to the fumes of tires burnt by residents at makeshift roadblocks. TV presenter Popi Tsapanidou couldn’t but answer: “You’re kidding me.”

Two members of parliament, one from SYRIZA and one from PASOK, denounced the behaviour of the police in parliament this morning. No official response was put forward by the government yet.

The riot police is reported to have pulled back to the local police station at the edge of the village around 12:30 EET. Ierissos resident @katerinaelikaki reports however as of 13:15 that policemen are conducting house searches. The pictures below are hers.

Update 18:00EET
The riot police conducted 5 house searches, after which they assaulted the assembled residents and journalists who were following them with tear gas. Alterthess reports that tear gas was also thrown inside houses, with parents struggling to get their children out in the midst of the chaos.

Update 08 March 14:00 EET
A meeting was called by the office of the prosecutor in Thessaloniki in order to defuse tensions in the area. It was initially reported that the police had refused to participate, but the meeting finally took place, with the participation of representatives from the residents’ committees together with their lawyers, the Director of the police of Central Macedonia, and a legal representative of mining company Hellas Gold. It was agreed that both sides would keep open lines of communication with the prosecutor’s office, while the prosecutor said that he would guarantee that due process is observed in police investigations. The residents said that they deemed the meeting fruitful and emphasized that they had no objection whatsoever to solving the matter of the arson attack on the Skouries mining site. 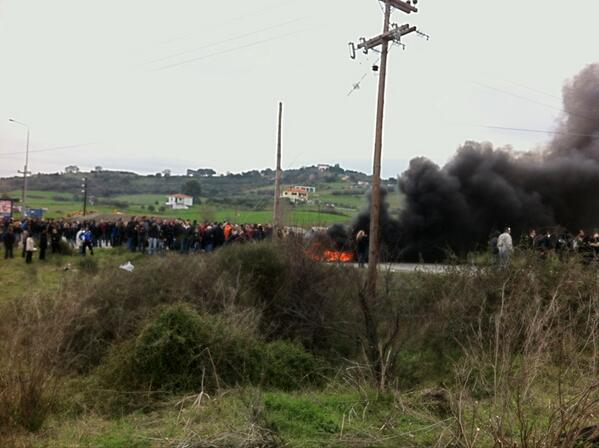 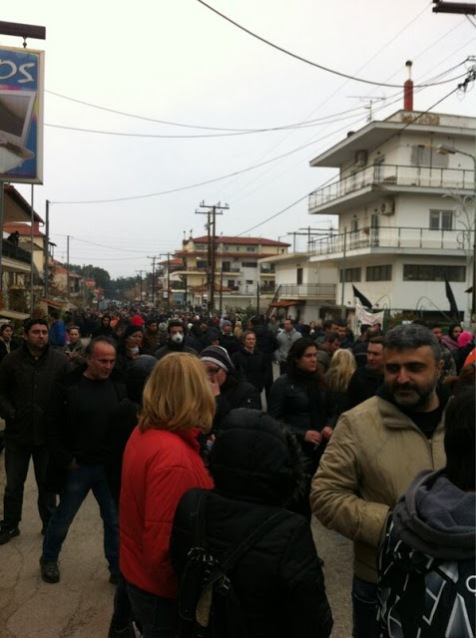