Skip to primary content
The text companion to this week’s #rbnews international show is now online. You can read it after the jump.
1. Shutdown of Greece’s public broadcaster

The government’s decision to shut down public broadcaster ERT caused this week the worst political crisis in Greece since the June 2012 elections, with the governement coalition seemingly teetering on the verge of collapse on Thursday evening.
ERT continued broadcasting throughout the week with the help of the European Broadcasting Union, but not without increasing difficulties as the government sought to use every possible legal and technical means in its arsenal to shut it down and misinform the public. On Sunday evening, the ERT satellite signal was taken down by the Israeli company that is re-transmitting it for the EBU, apparently under pressure from the Greek ambassador in Tel Aviv.
On Monday morning, viewers switching their TVs to the old ERT channel 2 frequency saw coloured bars with the name “NERIT”, which stands for “New Hellenic Radio, Internet and Television” and is reportedly the name chosen by the government for the new public broadcaster that will replace ERT. The appearance of NERIT on the airwaves caused an outcry in Greece as NERIT is not even a legal entity. The signal was later taken down, with digital network provider DIGEA claiming that it was a “mistake.” On Thursday, a magazine called “The World of Radio and Television,” identical in appearance to ERT’s magazine “Radio and Television”, made its appearance in newspaper kiosks. It was apparently prepared by a minor publishing house and claimed to host an interview with TV presenter Tatiana Stefanidou, who denied that she had ever spoken to them.
Greece’s highest administrative court, the Council of State, issued on Monday a rather cryptic ruling about the shutdown of ERT. The ruling demands that broadcasts resume immediately but acknowledges that the legal person ERT has been disbanded, leaving open the question to know who should be broadcasting. A war of words began between political parties and legal experts as to what the ruling actually means. By Tuesday evening, a clarification to the ruling, which was heavily supportive of the government’s interpretation, was published by State-run Athens News Agency, which claimed it came from the President of the Council of State himself. Hours later, the President denied ever issuing such a clarification. A second, more detailed ruling issued on Thursday evening is equally cryptic.
The government has so far refused to enforce the ruling and kept ERT’s signal off the air under various pretexts. On Friday morning, government spokesman Simos Kedikoglou argued in an interview that viewers’ screens were not black anymore, since they now display coloured bars. On Thursday evening, during its session to issue the second ruling about ERT, the Council of State noted that it would reconvene if the government did not take appropriate steps to resume broadcasts.
The government also refused to take up the question of ERT in parliament. Discussion of an amendment submitted by the Communist Party to annul the decision to shut down ERT was rejected twice by government ministers, resulting in opposition parties leaving the plenary session of parliament in protest.
Demonstrations and events in solidarity with ERT continued during the week across Greece and abroad, while ERT’s musical ensembles, whose staff are not covered by the Council of State decision, have been performing at the ERT headquarters every night. On Sunday 16 May, a team of journalists working for various media produced a strike edition of a free Sunday newspaper, “Unfettered View”, which distributed 100,000 copies across the country. On the same day however, several corporate media started breaking the strike, which was officially suspended on the next evening due to crucial political developments. 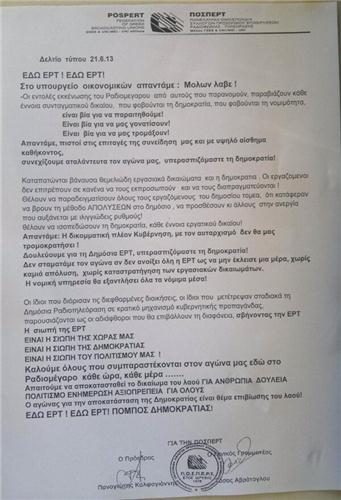 After a week of meetings of the three leaders, the three-party coalition government, which had come under obvious strain because of the ERT issue, started falling apart. Democratic Left announced on Friday that it was withdrawing its support for the government, which is now a two-party coalition of New Democracy and PASOK, giving it a slim, three-seat majority in parliament. It is unclear which independent MPs, if any, will choose to support it. Hours after the announcement that Democratic Left was leaving the government coalition, Finance Minister Giannis Stournaras issued a statement announcing that the government would determine the nature of the 2,000 positions needed to run an interim public broadcaster, that he had requested that partial severance pay be transferred to former ERT employees’ bank accounts in order to formalise the sackings, and that the government is asking former ERT staff to leave ERT premises in order to enable broadcasts to resume. The ERT employees union issued a defiant reply that reads: “This is ERT! Molon labe (Come and claim it).”

2. DIGEA and the digital network providers call for expressions of interest

The public consultation on the selection of a digital network provider ended on 19 June, with the call for tenders due to be published on 30 June. As we reported last week on #rbnews international, the terms of the call for tenders are tailored to match the profile of digital network provider DIGEA, a consortium of Greece’s six largest private media groups, whose interests are closely entwined with those of the Greek political class and who have been extremely supportive of austerity and bailout policies.
Under current circumstances, with ERT being disbanded, and with no other serious bidder, DIGEA is most likely to become Greece’s sole digital network provider. Implications for freedom of the press are rather obvious given DIGEA’s choice to throw off the air the TV channel of the Communist Party, 902, which was re-transmitting ERT’s “pirate” programme after it was shut down.
These facts remain little-known in Greece, as accurate analysis is only available on ERT, the Editor’s Newspaper and through online media. Public reaction has however been mounting, and the Union of Regional Channels of Greece has taken its case to the Competitiveness Committee, the judiciary and relevant European authorities and courts in order to block the tendering process, saying: “This would be the end of small private regional channels.”

3. Shutdown of schools and hospitals

More public services are expected to be shut down in the coming weeks in the framework of overall austerity policies. It is anticipated that a ministerial decree will be issued on 20 July to shut down 13 public hospitals, merge 330 clinics and 500 medical labs and transfer 600 of the 1200 public health clinics run by National Health System doctors. Furthermore, 32 primary schools and 89 kindergartens are due to close down, while 27 primary schools and 13 kindergartens will be merged, and another 34 and 5 will be downgraded. These government decisions were condemned by relevant organisations. The Federation of Hospital Doctors called the shutdown of public hospitals a “criminal act” at a time when the number of patients in public health structures is up by 40% due to their inability to afford private care.

4. Skouries
The Halkidiki policemen’s union addressed a letter to the Ministry of Public Order on 15 June to demand that at least 10 riot police squads be permanently assigned to the Skouries area, where tensions run high between ore mining company Hellas Gold and local residents who oppose the development of a massive mining project because of the damage it would cause to the environment and economy of the region. The Union’s argument is that the need for police reinforcements in the region is permanent, and that these duties should not be carried out by squads brought in temporarily from other prefectures of Northern Greece.
Meanwhile, the Coordination Committee Against Mining in Ierissos reported that on 19 June, a resident of Thessaloniki was detained by National Security and forced to hand over a DNA sample under duress. This is but another addition to a long list of people whose DNA was forcibly taken by the police as they were called to the precinct during the investigation of an arson attack on the Skouries work site in February this year. However, the vast majority of detainees were residents of Ierissos or surrounding villages, while very few cases have been reported in Thessaloniki.
5. Lawsuits related to Athens Indymedia
The former rector of the Athens Polytechnic University Konstantinos Mountzouris and the general secretary of the Workers’ Revolutionary Party Savvas Michail will be facing trial on charges of defamation, incitement to violence and breaking the peace that were filed against them by two Golden Dawn MPs.
The Golden Dawn MPs had filed charges against a wide range of left-wing individuals and groups, but the Court of Misdemeanours retained the case only against Mountzouris and Michail, the former because he allowed for the Athens Indymedia website to operate out of his university and the latter because his party had described Golden Dawn as a neo-Nazi party that organises assaults against immigrants in a text published in 2009.
The trial will take place on Tuesday 03 September.