This week on #rbnews international, we continued our series about culture in the time of the crisis with a show dedicated to the musical ensembles of Greece’s public broadcaster ERT. The government’s  sudden decision to shut down ERT on 11 June 2013 caused a public outcry in Greece and internationally. Much attention has however been focusing on issues pertaining to freedom of the press, and little to ERT’s contribution to Greek cultural life at large. The ERT musical ensembles include a symphony orchestra, a contemporary music orchestra and a chorus, and are widely considered to be among the best in the country. A petition to save these musical ensembles can be found on Avaaz.

The pieces of music included in this podcast (Elgar’s Nimrod, Beethoven’s Fifth Symphony, Verdi’s Dies Irae, and the overture of Mozart’s Magic Flute) were performed during the solidarity concert organized at ERT on 14 June 2013, with participation from all the major orchestras of the greater Athens area. You can watch a partial video of this concert here.

And of course, you can listen to the podcast, as usual, after the jump.

END_OF_DOCUMENT_TOKEN_TO_BE_REPLACED 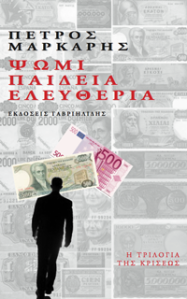 On #rbnews international this week, we continued our series about culture in the time of the crisis. The first two shows focused on theatre and dance; today we moved on to books and had the pleasure to interview Petros Markaris, a Greek crime fiction writer whose latest novel, Bread – Education – Freedom, is the last installment of his Crisis Trilogy. Mr. Markaris told us of his approach to crime fiction, of his thoughts on Athens and Greek society during the crisis, and of his assessment of the impact of the crisis on cultural life.

Special thanks to @amaenad who translated the excerpts of Bread – Education – Freedom that you can hear in the show.

The podcast is available, as usual, after the jump.

END_OF_DOCUMENT_TOKEN_TO_BE_REPLACED

On #rbnews international on 02 February 2013, we continued our series about culture in the time of the crisis in Greece with a show dedicated to dance. We interviewed Renato Zanella (@ZanellaRZ), the head of the ballet company at the Greek National Opera, who launched, among other things, the Dance Box, a bridge programme for unemployed graduates of the Opera’s dance academy. The Dance Box company will be officially presented in a dance gala in the Olympia theatre in Athens on Sunday 03 February.

The pieces of music in the show are excerpts from:

You can listen to the podcast after the jump.
END_OF_DOCUMENT_TOKEN_TO_BE_REPLACED

On #rbnews international on 19 January 2013, we inaugurated our series about culture in the time of the crisis in Greece with a show dedicated to the play “Our Great Circus”, which is currently staged in the National Theatre of Northern Greece (@NTNGreece) in Thessaloniki. Director Sotiris Chatzakis, actors Tasos Nousias and Marina Aslanoglou, and singer Zaharias Karounis told us about this seminal text of contemporary Greek political theatre, the reasons behind its success in 1973 as well as 2012-2013, and the changes and challenges posed by the crisis to the performing arts scene in Greece.

The music excerpts in the show are the songs composed by Stavros Xarchakos for the play, with the voice of Zaharias Karounis from the 2012-2013 run of the play and Nikos Xylouris from the 1973 run, and “Ta Lianotragouda” from the “Megalo Erotiko” by Manos Hatzidakis.

You can listen to the podcast after the jump.